Another VISAR boat ride for the Governor - did history repeat itself? | VISAR

Another VISAR boat ride for the Governor – did history repeat itself?

Last month VISAR crew took Governor John Duncan out for a ride on its rescue boat. In 2011 a similar boat ride didn’t go so smoothly. Did history repeat itself with this excursion? Tom Means, current Tortola Crew Representative who has been a volunteer crew member with VISAR for 14 years, writes about the boat ride that had everyone holding their breath!

Now that we’ve successfully taken the Governor of the Virgin Islands, John Duncan, out of VISAR’s Spirit boat I feel comfortable telling the story behind why the Visar crew wanted to take him for a boat ride in the first place – to get the proverbial monkey off our back.  So here goes.

“My name is Steve and I am an Emergency First Responder.”

Those were the words I spoke to Boyd McCleary, then Governor of the British Virgin Islands on the day we took him out in the rescue boat for an orientation on the capabilities of Virgin Islands Search and Rescue in 2011.

The boat ride had been set up months prior by VISAR’s President.  “Give our patron a ride on the rescue boat and go through a simulated medical emergency.  It’ll be easy,” Phil Aspinall said.  The Governor’s daughter would have a broken leg on Cooper Island that required medical attention and evacuation.

The crew that day was experienced:  Andrew Waters was the Helmsman, Gerard Kraakman was the navigator, Paul Hubbard the third crewmember, and I was the Medic.  We had a photo op on the steps at VISAR before we left, which gave us a chance to meet the Governor, his wife Jenny, and their daughter Emily.

We took the Governor to the south side of Cooper and Salt Islands to show him not only the capabilities of the crew, but also of the boat.  Just as we approached the National Park Wreck of HMS Rhone, we drove through a series of swells, one of which had a ‘hole’ in it.

The boat went up the face of the wave, taking us with it.  Then the boat started coming down, and we started coming down too – all of us except for the Governor, that is. He kept going up!  Mind you, only for a split second, but he kept going up nonetheless.  So the boat came down with the crew, and then the Governor followed shortly thereafter.  His feet were the first part of his body to come into contact with the boat, followed shortly by his hand, wrist, legs, and torso, in that order.  His watch went one way and his leg, specifically his knee, went the other.

We realized immediately that things were not as they should be.  Mr. McCleary was injured and we needed to act fast.  As we maneuvered our patron onto the treatment platform of the boat, my survival instincts kicked in, and I do know a thing or two about survival, having witnessed one of the greatest examples of self-preservation in the history of mankind.  Years ago I was water skiing in the Malacca straights when my skiing partner, after a fall, suddenly said “I’m getting in the boat” and quite literally swam over me in order to get back on the ski boat, leaving me to ski solo.  When I confronted her later about her abrupt departure, she calmly responded, “I thought I saw a shark.”

By this time Mr. McCleary’s knee is roughly the size of a large coconut (though not as hairy).  As I’m watching it swell before my eyes, the thoughts going through my mind did not make me feel warm and fuzzy.  This capabilities exercise that we were meant to go on has just turned real.  We’re not treating the Governor’s daughter in a simulated medical emergency, we’re treating the Governor’s real-life injury.

The powers of His Excellency the Governor are broad and far reaching.  This is a man who, with the stroke of a pen, can dissolve organizations.  He can revoke Crown land leases.  He can incarcerate offenders and then deport them upon their eventual release.  And we just broke his knee.  It was the ability to exercise these latter powers that now had my full and undivided attention.  In my mind’s eye I can see angry mobs shaking their fists outside of VISAR’s Base Station.  I’m seeing big hairy men wearing orange jumpsuits who are now taking more than a passing interest in me.  I’m viewing my world through rusty iron bars, bidding farewell to friends and family, etc., etc.  And I’m thinking, hoping, that Maybe he’s forgotten my name.  It was with those thoughts running through my head that the following words jumped out of my mouth.

“Governor, my name is Steve.”  And then VISAR’s training practices took over.  I had already cut his spray-suit in order to get a look at his knee.  I put him on oxygen, took his vital signs, and stabilized his knee with a vacuum splint.  Andrew realized the severity of the situation and announced that we were returning to Base.

Meanwhile, Gerard and Paul are standing in their positions on the boat, speechlessly observing an ever worsening situation.  I’ve been close mates with both of them for 14 years.  We have been through a lot together, professionally and personally.  Both are senior members of VISAR and long standing Board members.  They’re both opinionated and neither of them is afraid to speak up.  But whilst the Governor is writhing in agony on the back of the boat and Andrew is busily getting us back to Base, I’m looking at the two of them and all I can hear are crickets chirping, and somewhere off in the distance, a dog barking.

Being the consummate professional the Governor never lost his composure.  As we returned to Base he directed us to not tell his wife what had happened, but instead he asked us tell her that he had an emergency phone call and had to return to his office.  As ordered, Gerard called Mike Rowe, the VISAR representative escorting the Governor’s wife and daughter through the exercise, informed Mike of the situation and relayed to him the instructions that he had just been given.

Mike relayed the message authoritatively to Jenny “We’ve had to cancel the exercise because the Governor had to return to his office for an emergency phone call.”  Well, Jenny bought none of it.  Afterwards, I think Mike deserved the most sympathy as Jenny, who is one of the most likable and kindest people one could ever hope to meet, quickly and diplomatically extracted the truth from him.  I heard later that Mike was seen pale and perspiring walking unsteadily mumbling, “Well, all that aside Mrs. Lincoln, what did you think of the play?”

We arrived back at Base to find the Governor’s official car in the car park with a young police officer waiting patiently.  The police officer took one look at his boss and shook his head.  “You were with these guys for 30 minutes and this is what I get back?”  We carefully put the Governor into the back seat of his car.  I had asked him earlier if he wanted an ambulance to transport him to the hospital and he looked at me as if I’d just asked if I could come over to his house for a sleepover.

So he’s now out of our hands and on his way to Peebles hospital.  It’s 10:00 in the morning and I’m silently going over in my head the list of countries that don’t have extradition treaties with the UK, and wondering when the next ferry leaves Tortola.   I then ask “Does Her Majesty’s Prison have air conditioning?”  I got the same looks from Andrew, Gerard, and Paul that I got from the Governor when I asked him if he wanted me to call 911.

We walked out back and sat down.  None of us wanted to talk about it.  Not a word was spoken.  Contrition hung in the air like the smell of over-cooked cabbage, when Cris Ruffell Smith, VISAR’s Vice President, walked up and asked us how the exercise went.  “Fine, good,” we mumbled, staring at our feet.  Sensing a bit of unease Cris pressed a bit more.  “So, it went well?” he asked.  “Yeah, fine, good,” we said.  (See the definition of diplomacy above).

Sometime later Phil Aspinall showed up at Base and came around back to talk to us.  “I’ve just seen the Governor, he’s fine, he’s happy, there’s no problem.”  To say that we were relieved would be an understatement, but Phil went on.  The Governor said that he was very impressed with Base, with the boat, with the crew, and especially with Steve, to which Phil responded, “We don’t have anyone on crew named Steve.”   “But I’m certain that that is what he said his name was,” said the Governor.  A look of confusion and utter bewilderment crossed the faces of Phil and my fellow crewmembers.  They looked back and forth from one another, and then slowly turned their heads towards me.

And from that moment on the four of us became known as Killer, Steve, and the ghost riders.  There are some things you can’t share without forging a bond amongst friends, and breaking the Governor of the Virgin Islands is one of them.

Family Safety Morning’s inaugural event took place in July of 2019 at our base in Tortola and was a big success. 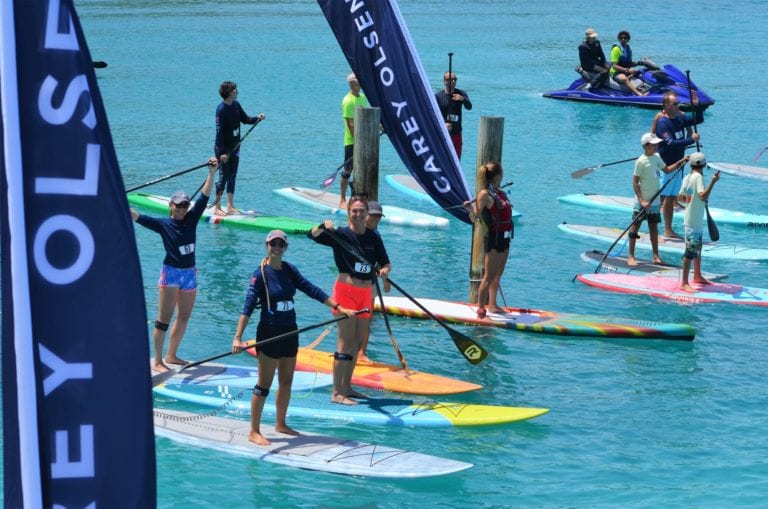 Swim and SUP the Sound

Swim and SUP the Sound is a great day of physical activities and family fun.